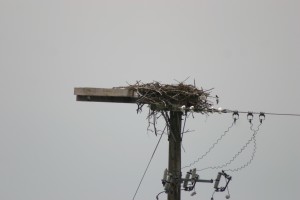 We found this nest on a telephone pole close to a bridge near Lake Wolsey (Gore Bay twp) in October 2008 and the Osprey was still living in it then – likey getting ready to move south for the season.

Ospreys eat fish almost exclusively.  So when the lakes freeze over they head south.  Unlike bald eagles which have been spotted all year round on Manitoulin Island.